In his inaugural lecture Cotterrell describes the motivation for his ongoing research and the origins of the ER project.

Lecture presented at the Sallis Benney Theatre, University of Brighton 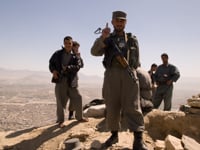 Inaugural lecture from Professor David Cotterrell – For the past few years, Cotterrell had been embarking on an eclectic series of field trips and producing a series of experimental artworks to clarify his experience and understanding of fear, risk, and empathetic failure.

He had been feeling uncomfortable with war being described as a declared state rather than a location on an iterative scale of social disintegration. While accepting that some measure of polarisation is a pre-requisite for conflict, Cotterrell has been considering the iterative progressive cycle of disengagement that is required to allow barriers to be constructed, long before they’re recognised as fortifications. His research seeks to consider the staged challenges to empathy that occur long prior to the descent into the polarised engagement of military forces.

Where risk has been identified, and measures are variably employed as responsive protocols, a situation of distancing occurs – most obviously between the observer and the subject, but also between the perceptions of different observers. This lecture explores the contradictory nature of mutually exclusive versions of the truth, the way in which risk can be a catalyst to the creation of partial truths, and the possibility of the loss of pluralist narratives as communities and individuals are denied access to each others’ vantage points.

In his inaugural lecture, Cotterrell describes the motivation and observations of his ongoing research. At a time of increasing political polarisation, he discusses an artists’ idiosyncratic search to find languages with which to explore the failure of dialogue.

Video produced by Parsley Productions for University of Brighton. The event was chaired and introduced by Professor Anne Boddington.